Apple is Unveiling the i-Watch on September 9th!!

If you ask many pundits when Apple will unveil its often-rumored wearable device, many of them will say October. However, we may have to revise those expectations a bit. Recode's sources now claim that Apple will unveil the gadget on September 9th -- you know, the same day that many expect to see at least one new iPhone.

There's little to back the claim at this point beyond the site's reputation for accurate leaks, but the timing makes sense given that the iPhone and the mystery wristwear are expected to work virtually hand-in-hand. As for actual technical details?

Besides the expected fitness and home automation support, there isn't much more to say -- most likely, you'll have to wait a couple more weeks to get the full scoop.

BestForexTeam Wants to Give You $100 to Trade on eToro

Here's a Deal to Good to Pass-up!

This is no joke! The professionals at BestForexTeam.com will invest 0 dollars in your beginning bankroll at eToro. Even better news is that if you have an IntelliTraders account you can immedietly login at BestForexTeam and get started!

So hurry over to BestForexTeam.com and secure your 0!

he numbers speak for themselves! We can help you generate a minimum of 0/week simply by following our expert trades. Last week, we stepped it up to 0! We help our traders earn over ,000 per month. Becoming a Gold Member is the first step to financial freedom! 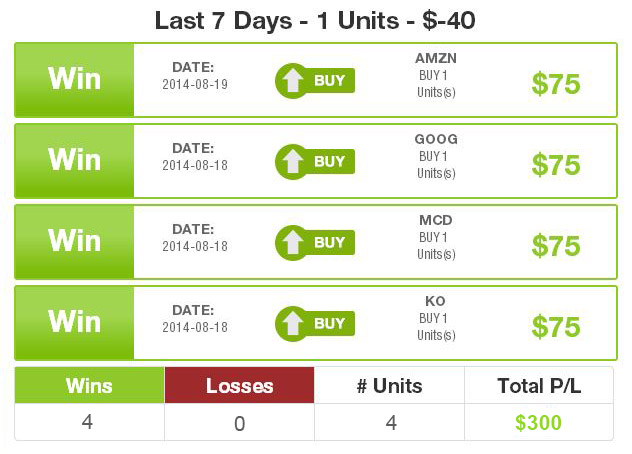 Upgrade to GOLD status now and receive ALL IT Expert Alerts free for 3 months. You can't afford to miss out!

Wall Street finished the week mixed after Federal Reserve Chair Janet Yellen stated that the Fed will take its time over raising interest rates to avoid disrupting recovery. The S&P 500 fell by 0.20%, the NASDAQ...

You are allowed to copy up to 5 traders on your eToro CopyTrader account. We have done the dirty work for you. Below you will find a healthy mix of traders with a wide variety of risk tolerance, leverage usage, trading frequency, and returns. We recommend picking 5 of these traders to follow for the next month for your portfolio:

Oppenheimer Has Gold Miners as a Top Trade Idea

If any asset class has disappointed investors over the last three years, it has been gold. Many on Wall Street are just now starting to reexamine gold for investors’ portfolios. Years of quantitative easing by the Federal Reserve and other central banks have started to accomplish their goal of re-inflating economies. The problem is they may have reinflated too much, and inflationary pressures could already exist — ask any person who has shopped for meat and groceries these days.

The technical team at Oppenheimer sees big upside in gold miners going forward, and analysts are actually more bullish on the miners than the precious metal itself. In their new report, Oppenheimer analysts cite an exchange traded fund (ETF) and three top stocks to buy in the gold mining arena.

The Markets Work in Mysterious Ways

Welcome to a new week. In the aftermath of last Friday’s NFP, we can tell (once again), that the market works in mysterious ways. If you look at it from a simplistic point of view, the result of only 209k jobs added to the American Job market (against 288K last month or a consensus of 233k), should have boosted every single pair confronted to the USD, starting with the EUR/USD, and the reaction was not so harsh.

We had a peak after the announcement and then a correction that endures until now. The way I see it is like a box of matches. If you take a match from the box, and rub it against the sandpaper, the normal situation is that the match should ignite, but this doesn’t happen every single time: sometimes its head breaks, sometimes the material on the matchstick head is moist, and in other occasions the sandpaper is wearing off.

U.S. indices traded mixed yesterday after the Federal Reserve revealed that the interest rate may rise sooner than expected. The NASDAQ fell by 0.02%, the S&P 500 rose by 0.25%, and the Dow Jones added 0.35% to its...