With iOS 8 now up, running, and destroying iPhone 4s everywhere, some users will be pleased to know that Apple AAPL +0.45% has added a neat little trick to improve battery life.

Already a feature on some Android devices (and some half-hearted third party iOS apps), iOS 8 now lets users view a breakdown of which apps are draining that precious battery life.

Despite improved battery life on the iPhone 6 and iPhone 6 Plus, there are still apps that will run in the background and unnecessarily drain your reserves. Anecdotally, users of earlier models have complained about their battery draining noticeably faster after they installed iOS 8.

These Are Simply the Best Brokers!

Trying to find the right broker for you can often be a difficult task. With all the brokers in the world claiming to be the best and all offering great deals how do you know which one to choose?

That's the purpose of this article - to lead you to the ultimate Binary Option brokers and save you the headache. Each week we grade various brokers on their offers and reliability. Only after grueling testing do we give them the title of best trading brokers. We recommend you do a little homework over which one is truly the right one for you, but these are all industry leaders.

Most of these brokers will even offer you extra deals for signing up through IntelliTraders, so rest assured you've found the ultimate broker list.

Even the biggest currency traders and market experts didn’t expect such a monumental occurrence to sneak up on them, but that is exactly what has happened. A Scottish referendum scheduled this week, which was just supposed to be the formal approval of Scotland’s continued participation in the United Kingdom, has suddenly and quickly turned into a nightmare for British politicians. The Scots, in a surge of national pride and patriotism, may finally be voting Yes for independence.

Good for them, but not so good for investors, as this is a turn of events they did not foresee. Political turmoil in the Middle East and in the Ukraine has become the order of the day, but certainly not in the United Kingdom. And the reaction in markets? Brutal. The Pound Sterling was dropped by investors like a hot potato, a ticking time bomb, if you will. The currency opened the trading week at 1.623, a gap to the downside from the 1.63 level where it closed for the weekend. The Pound Sterling’s volatility surged to its highest level since the British government was forced to rescue the Royal Bank of Scotland.

Wall Street finished higher yesterday with the NASDAQ rising by 0.21%, the S&P 500 by 0.13%, and the Dow Jones adding 0.15% to its value. Technically, as long as the Dow Jones is holding above the bullish trend...

Why Do People Lose Money in Forex Trading?

Victory in the stock market /commerce is mainly reliant on an individual’s psychological sturdiness and his talent to go with the flow……… Many a times you are supposed to wait, think deeply and clearly so as to join the activity.

John Coates--------- a leading explorer in neuroscience and economics at the University of Cambridge has presented a hypothesis, according to which, there would be lesser speculative manias and abrupt remarkable turn down of stock market prices, if ladies and men of mature age deal with most of the business.

Coates, has scrutinized the hormones of stockbrokers, for evidence on how much liableness women and elder barterers are enthusiastic to acquire.

In keeping with Coates, the male sex hormone testosterone is the bit that gives reasons for absurd excitement. No doubt, a meticulous quantity of testosterone is desirable, however, an excess of it can lead to a rush in equity prices shadowed by a radical fall.

"We rate RANDGOLD RESOURCES LTD (GOLD) a BUY. This is driven by a few notable strengths, which we believe should have a greater impact than any weaknesses, and should give investors a better performance opportunity than most stocks we cover. The company's strengths can be seen in multiple areas, such as its revenue growth, largely solid financial position with reasonable debt levels by most measures, expanding profit margins, good cash flow from operations and growth in earnings per share. We feel these strengths outweigh the fact that the company has had lackluster performance in the stock itself."

The Euro is going up quite well relying on up slanting support line. Resistance on the upside forms an ascending triangle, what is a bullish pattern. Nevertheless inability to rise past resistance will push the rate back.

Get Free Trade Alerts When You Become a Gold Member!

Let us do the work for you

At IntelliTraders we offer our traders one free trade alert per day. This means we give you alerts on what trades are most likely to win. You can think of these a freebies!

One free trade is definitely nice, but wouldn't it be better to get an expert traders advice every time you went to trade? Well thankfully, you can get expert trade alerts for becoming a GOLD member. This makes your chance of gaining profits dramatically increase.

Being a GOLD Member practically takes the risk out of trading!

The numbers speak for themselves! We can help you generate a minimum of 0/week simply by following our expert trades. Last week, we stepped it up to 5! If your interested in making over ,000 per month, then you are in the right spot.

When you upgrade to GOLD status you will recieve ALL IT Expert Alerts free for 3 months. You can't afford to miss out! 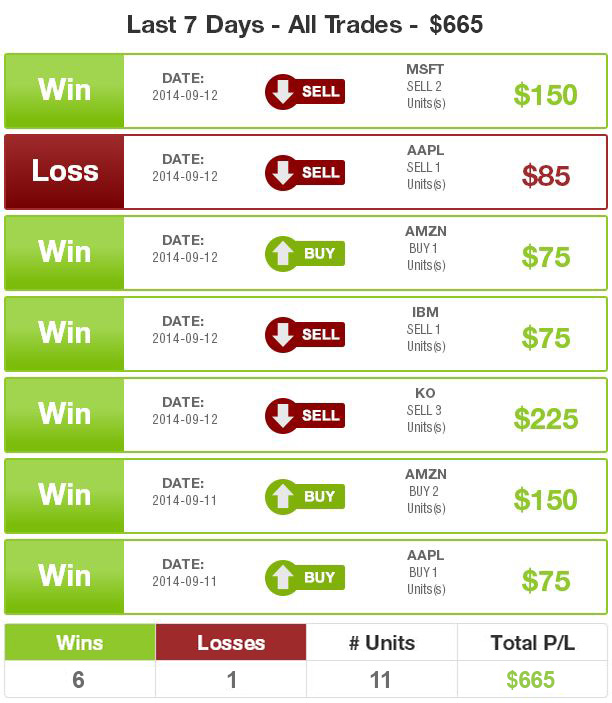 So in the end of the day we see a symmetrical triangle, which is one of the most reliable patterns suggesting consolidation. The rate is approaching the apex, that is why consolidation will end soon with resumption of downward pressure....